The tea cup has an excerpt of a poem carved on its interior, based on a poem carved on the walls of San Francisco’s Angel Island immigration station, where many Chinese immigrants were interrogated and detained for days to months at a time.

Angel Island was the point of entry for the majority of the approximately 175,000 Chinese immigrants who came to America between 1920 and 1940. The detention center on the island housed Chinese awaiting outcomes of immigration papers as well as Chinese awaiting deportation. The detainees were subject to physical exams, interrogations, and often long detentions, from weeks to months, aimed at upholding the exclusion laws that kept Chinese out of the country (see Soup Spoon for more details). 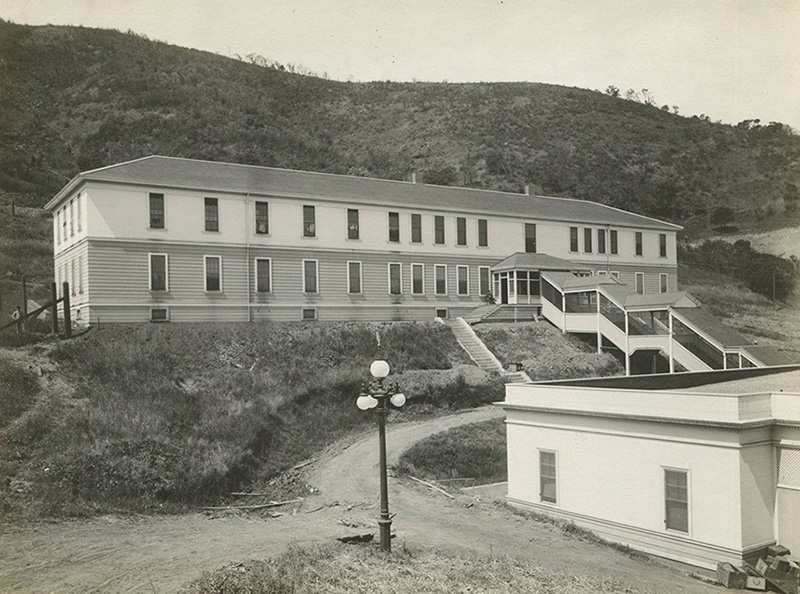 The Paper Sons phenomenon (see Plate for more details) only made exams and interrogations longer and more elaborate. Aside from the line inspection and eye exam by medical officers, they were subjected to an invasive exam of their blood and waste products to detect parasitic diseases such as hookworms. Lengthy interrogations were excessively detailed and often contained questions that nothing to do with their right to enter the United States. Transcripts ran for hundreds of pages where a single wrong answer, no matter how trivial, could result in deportation. 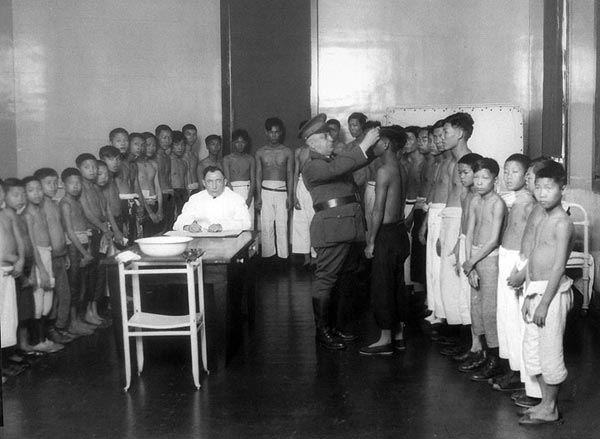 Because of this arduous and time-consuming process, the Chinese made up 70% of the detainee population at any time and they were detained the longest, 8 to 16 times longer than their European immigrants. This led to crowded, unsanitary, and unsafe living conditions with scarce access to food, light, and air.

Forbidden to communicate with the outside world, many detainees recorded their experience in poetry written and carved on walls of the immigration station. Over 150 of these poems were later translated and annotated. Many who left their marks were Cantonese villagers in their late teens who, despite having no more than a grammar school education, implemented classical forms of Chinese poetry, such as the seven character quatrain. Because of the fear of official reprisal, evidence about the authorship of the poems is sketchy to nonexistent. 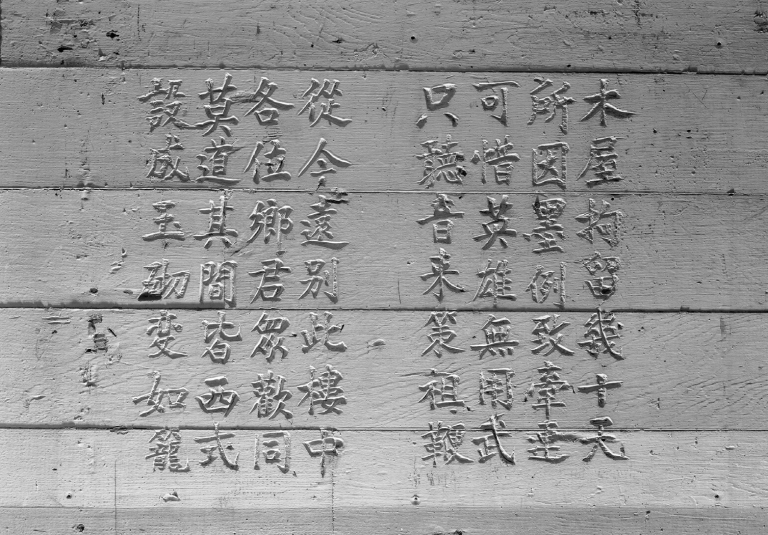 Engraved poem found on the walls of a lavatory room on the first floor of the detention barracks by an unknown author.
Photograph by Mak Takashi.

The first four lines of a poem by an unknown author is inscribed in the four walls of the interior of the tea cup. The poem is one of the few visible and well-preserved engravings found on Angel Island. The full translation of the poem is below:

Detained in this wooden house for several tens of days,
It is all because of the exclusion law that implicates me.
It’s a pity heroes have no way of exercising their prowess.
I can only await the word so that I can snap Zu’s whip.

From now on, I am departing far from this building.
All of my fellow villagers are rejoicing with me.
Don’t say that everything within is Western style.
Even if it is built of jade, it has turned into a cage.

The poem is written in Qiyan jueju, a style of classical Chinese poetry which originated during the Tang Dynasty. This form consisting of four phrases (or quatrain) each consisting of seven Chinese characters. Each of the four phrases follow the format of introduction (起句 “bringing into being”), development (承句 “understanding”), turnaround (転句 “changing”), and conclusion (結句 “drawing together”.) This particular poem consists of two verses, where the first verse is characterized by despair while the second verse is more hopeful.

In order to “engrave” the poem into the tea cup, I used an actual photograph of the engraved poem to produce a depth map to offset the walls of the interior of the cup. The hope was that the poem would be tactile and somewhat hidden and out of reach. As tea is poured into the cup, the characters are concealed by the liquid, but also becomes more visible as the surface of the liquid hugs the contours of the characters.

Finally, the glaze that is applied to the ceramic material partially conceals the characters on the walls of the tea cup. This was originally unintended, but I thought it was appropriate since immigration officers repeatedly filled the carved poetry with putty and paint as it was considered graffiti at the time.